Feral Scooters… We heard the first one before we saw it! And it sounded kind of somewhere in between a chain saw and a garden whipper-snipper. My first reaction was it was that either it was some kind of joke, or maybe an Indonesian version of the Mad Max movies was being shot nearby… 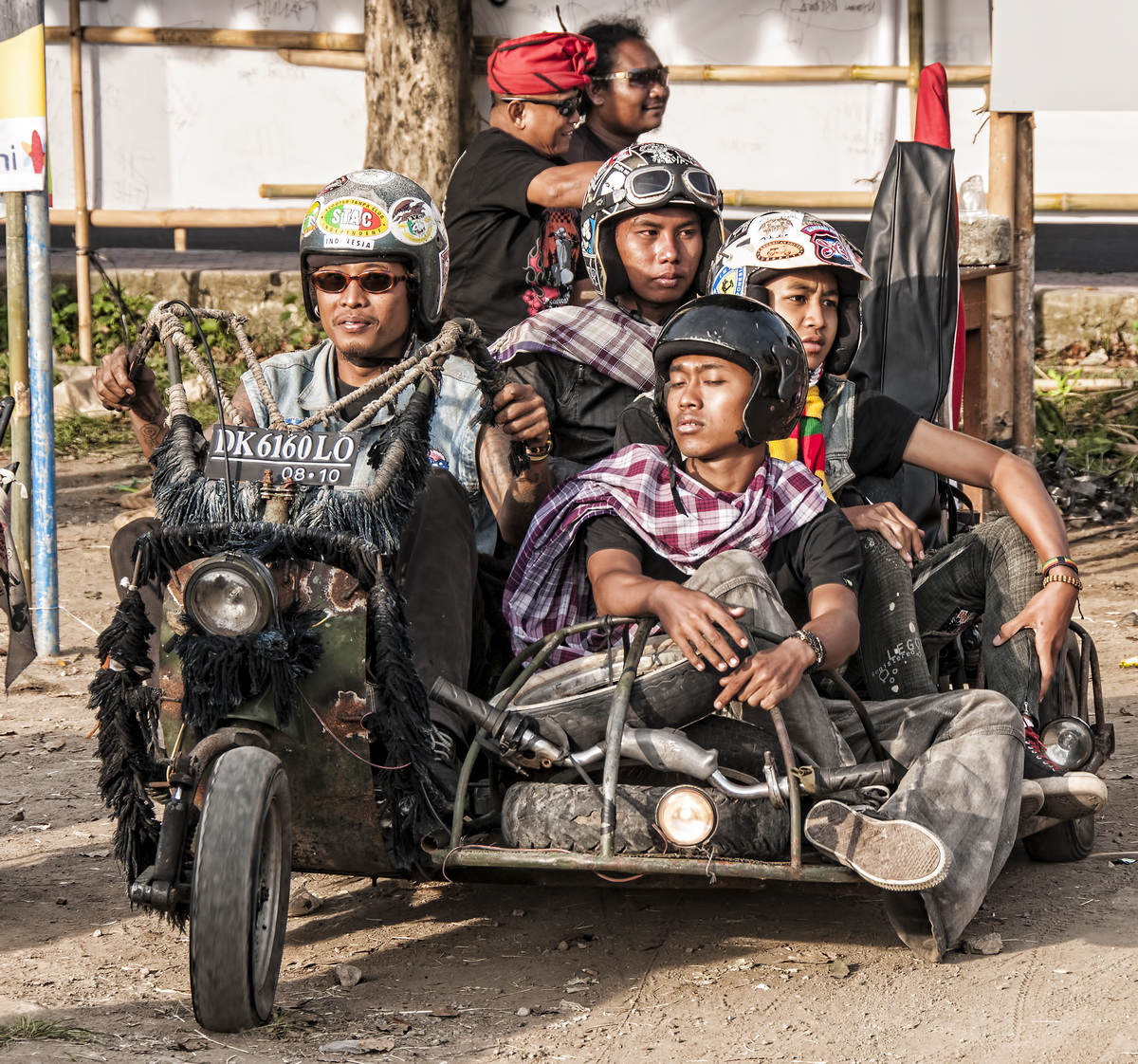 We were in Ubud for our annual Xmas sojourn in Bali and completely unaware that the football field in the center of town was the venue for “A Celebration of Indonesian Scooter Culture”.

Hosted by Bali’s Dewata Scooter Club, more than 2000 Vespas ultimately turned up for the event. But it was the feral scooters and their riders that caught the eye. 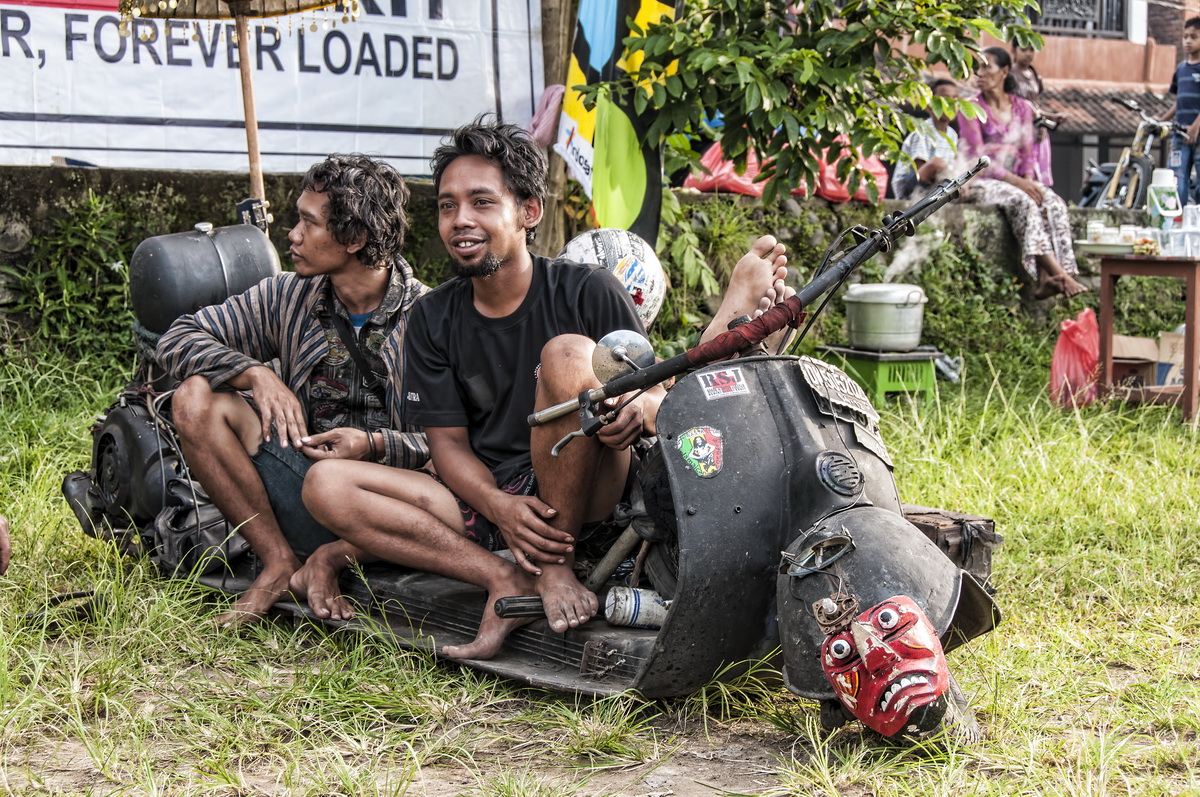 Anybody who has spent any time in Indonesia will be well aware of the people’s ability to make the most of what they have.

On my travels through the archipelago I have seen many examples of that… Mechanical contraptions crafted from a variety of parts salvaged from the scrap yard. But the feral Vespa’s are in a class of their own. 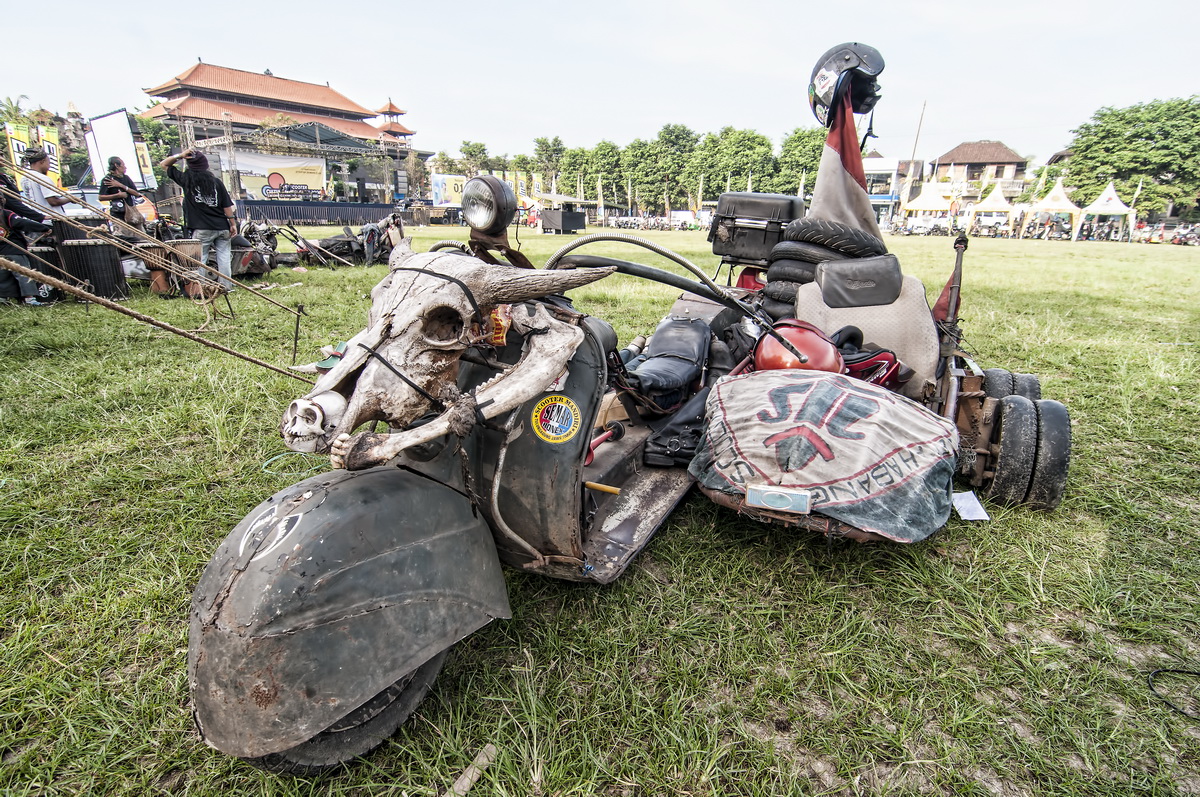 The basic theme for the ferals seemed to be create the weirdest form of two and three (or more…) wheeled transport possible. Load it with as many “scooterististas” that can squeeze aboard. And then ride it from as far away as possible to attend the rally in Ubud. 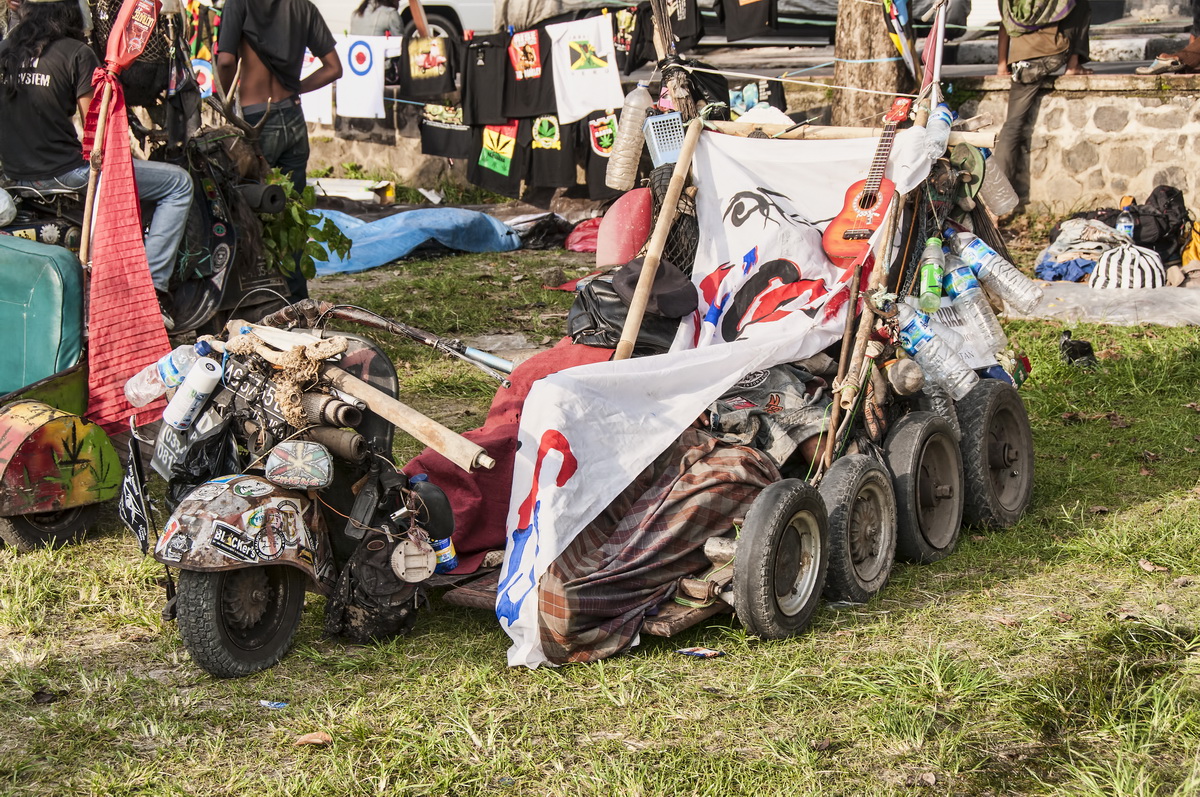 Have Vespa will travel…

Feral Scooters and their Scooteristas

An Indonesian feral scooteristista appears to be a cross between a hippie, a bikie and a rastafarian. 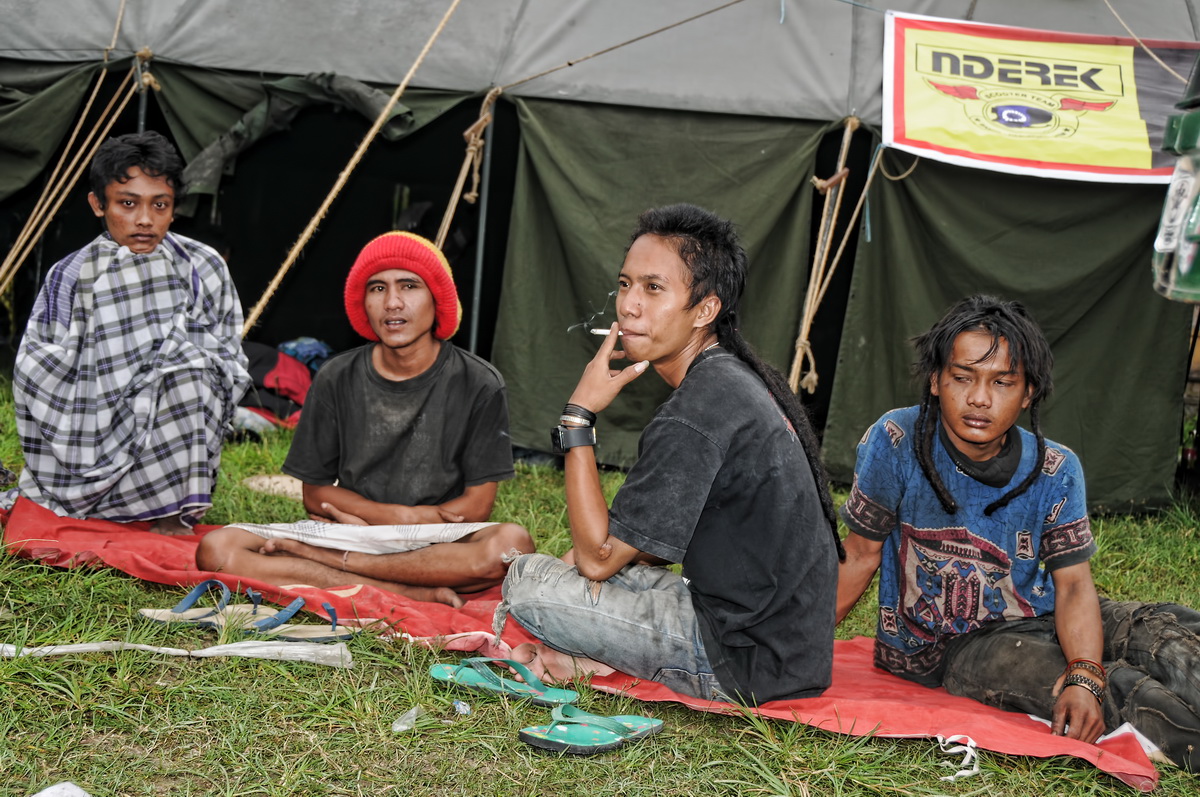 Indonesian scooteristista – a cross between a hippie, a bikie and a rastafarian

Age does not seem to be a barrier as the oldest scooterist I spoke to was 71 year old Rusno. Who together his mate, 65 year old Kohir, Rusno had ridden their feral Vespas from Balikpapan in Kalimantan!

A distance as the crow flies of 800km. But involving some rough roads in Borneo and crossing the Java Sea by ferry. Truly a journey not for the feint at heart… 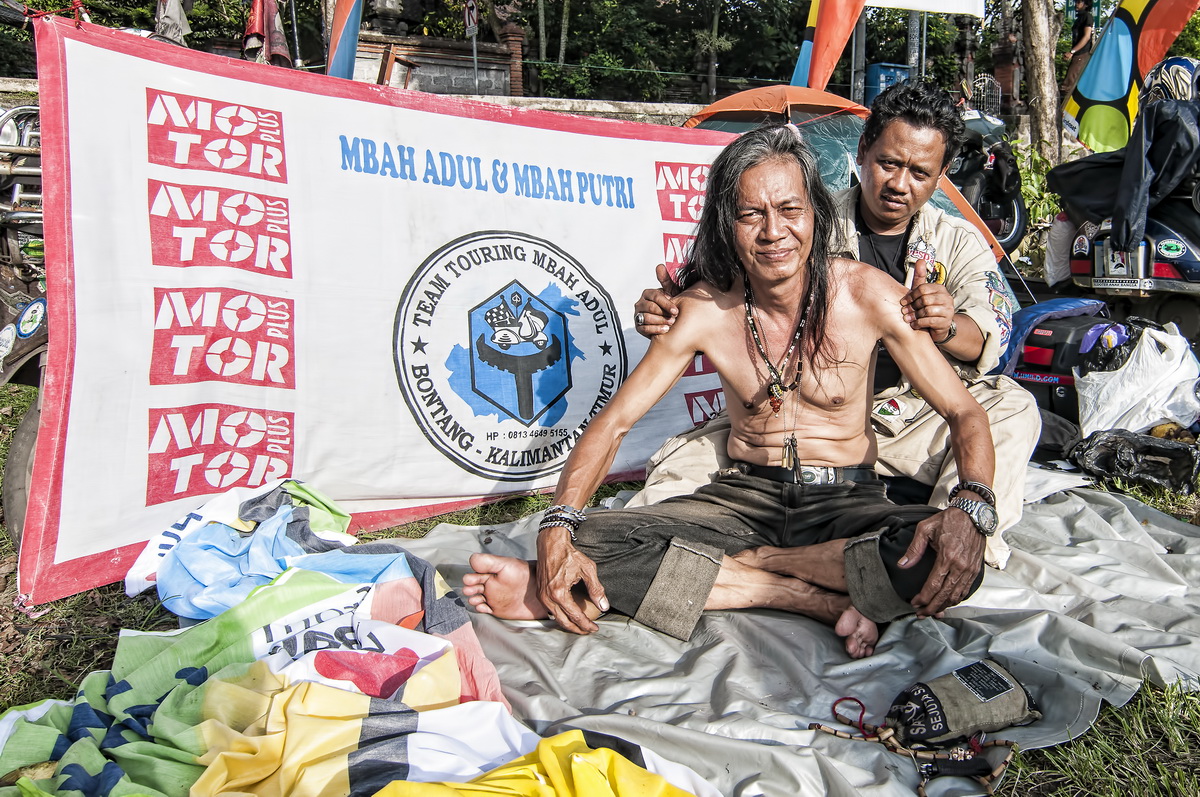 Wandering round the football field and talking to the scooterististas was an interesting experience. Because despite the wild look of the ferals, they all responded to my request to take photographs politely and positively and seemed to relish the attention.